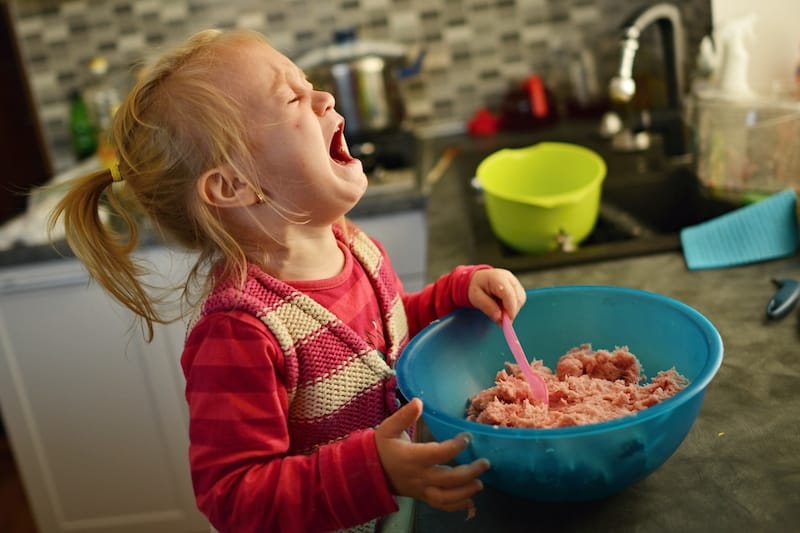 Here’s just one of the many incredible facts about toddlers’ development. Between the ages of one and two years old, the human cerebral cortex adds over two million synapses (the connections between brain cells) every single second. That probably helps explain another astonishing ability of toddlers: learning six or more new words each day.

Growing and learning so much at such a rapid rate can be overwhelming for a youngster. The result is often tantrums that seem to come out of the blue. However, there are ways to soothe a toddler tantrum. Let’s look at five of the best approaches.

Sometimes toddlers melt down for a very good reason. They’re too hot, too cold, tired, hungry, scared, or angry. Children at this age don’t have the skills necessary to express their feelings in calm, rational ways.

It’s your job as a parent to decode the signals and look for environmental clues. Then, if possible, solve the problem. If you’ve deduced correctly, you might be able to de-escalate the blow-up.

Another tack to take (particularly when the cause of the conniption is clear such as another child takes your toddler’s toy, or it’s time to leave the playground) is a distraction. Point out something interesting that’s happening like maybe there’s a train rumbling by, a butterfly flitting about, or a friend heading your way.

You can also try talking to your toddler about whatever activity is coming next. Don’t promise special treats, or you could set a dangerous precedent. However, sometimes knowing that it’s time to pick up Mommy from work or that lunch is nigh can help the child switch gears.

Time In, Not Time Out

Of course, many times it’s not evident what’s behind the outburst. That doesn’t mean there isn’t a reason though. In those instances, rather than punishing your child with a “time out,” give them a “time in.”

This could mean simply squatting down in front of them and making eye contact. Offering a hug or a snuggle might also do the trick. Talking to them calmly is another good choice.

Remember, tantrums happen because your toddler needs something. That could be a snack, a jacket, or a nap, or they could just crave connection and affection. It’s also possible that they are looking to you for help understanding their own feelings.

You’ve tried everything you can think of, to no avail. The toddler and their tantrum rage on. At times, all you can do is ride out the storm.

There are occasions when the child will benefit the most from getting it out of their system. Just make certain you stay nearby and continue to offer support.

Keep Your Own Cool

Above all, do your best to stay calm. This can be tricky, especially when you’re out in public and trying to avoid a scene.

Remind yourself that the tantrum will end eventually. Other people at the park or supermarket have been through this themselves. They’re probably not judging you, on the contrary, they are most likely empathizing.

Acting patient and loving will help reassure your child. Watching a parent freak out or flare up, on the other hand, can frighten them that much more.

Soothe a Toddler Tantrum by Tuning In

The more attuned you are to your child’s moods, habits, and emotions, the more equipped you’ll be to deal with their meltdowns. Once you know how to soothe a toddler tantrum, you’ll become a more confident parent.

Helping Your Child Cope with a Bully

“We recognize the many differences among our students
and appreciate each child as a unique individual.”